Refilling Knowledge in the Teenage Dimension

Move over Dr Who. Your Tardis needs to share time travel in the teenage dimension with the PODIS created by the CuriousWorks ReFill gang.

Our modified phone box (or Portal of Dimensions into Space as it is otherwise known) is being designed by teenagers to share the outta space ‘experience of growing up’ with visitors to next month’s WOW Arts Festival for Children.

Curious kids at WOW will be invited to step into the PODIS, seize the controls, and navigate through a selection of 90-second films made by Year 8 students at Miller Technology High School. Topics cover teenage issues ranging from music and bullying, to growing facial hair and girls smashing stereotypes to reach for their dreams. 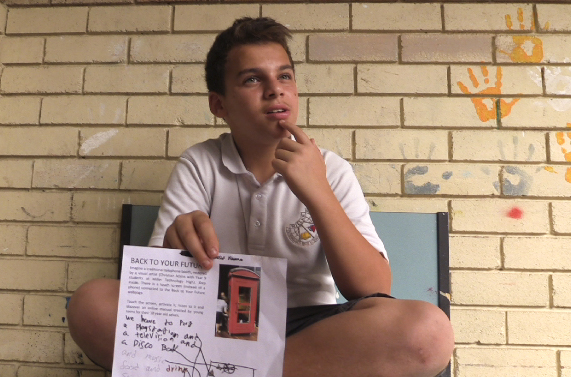 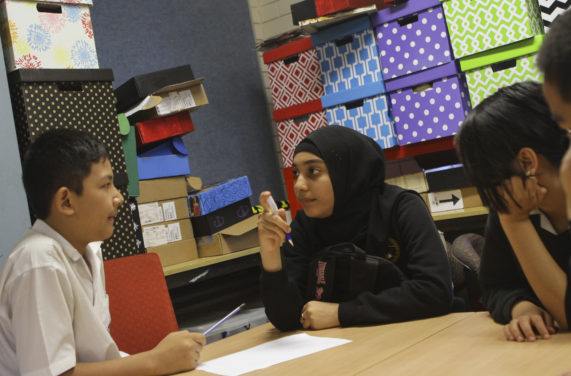 CuriousWorks filmmaker Guido Gonzalez said the concept is based around the idea of young teenagers returning from the future to advise primary school-age children of what’s coming in their lives.

“This kind of ‘advice to kids’ is so much more effective when it’s coming from other young people,” Guido said. “An anti-bullying film made by adults will always be serious, whereas the ReFill students have found a way to get that message across through humour. If the audience gets into it, it will have such an impact.”

ReFill is a partnership between CuriousWorks and the Casula Powerhouse Arts Centre to deliver a dynamic, multi-arts program with Miller Technology High School for students who might otherwise struggle to gain such opportunities.

“We’ve been running film-making classes with these students since last year, and they wanted some sort of exhibition to show their work. This was an innovative way of doing that, while also getting them into other forms of creative activity,” Guido said.

“Apart from writing, directing and editing films, they are building the PODIS controls that will release smoke and play videos. It’s engineering as well as art. The value of programs like this is that they allow kids to express themselves, while broadening their perspectives. They walk away with an attitude that they can achieve anything.”

PODIS construction is in full throttle and the films are on schedule to be ready for the WOW Festival being held at the Casula Powerhouse Arts Centre during the school holidays from 13 to 16 July.

The Refill program with Miller Technology High School has been fostered by leading educator Sally Atkins, who brokers community partnerships for her school. It has been running in various forms since 2007, and the current version is generously supported by Crown Resorts Foundation’s Western Sydney Arts Initiative. In 2015 the MCA’s National Creative Learning Centre came on board as a city partner, offering state-of-the-art facilities for skills development and critical artistic play.

CuriousWorks has a proud history of working with kids at the WOW Festival. Each year, we train a team of young reporters to creatively document activities. View last year’s result here.