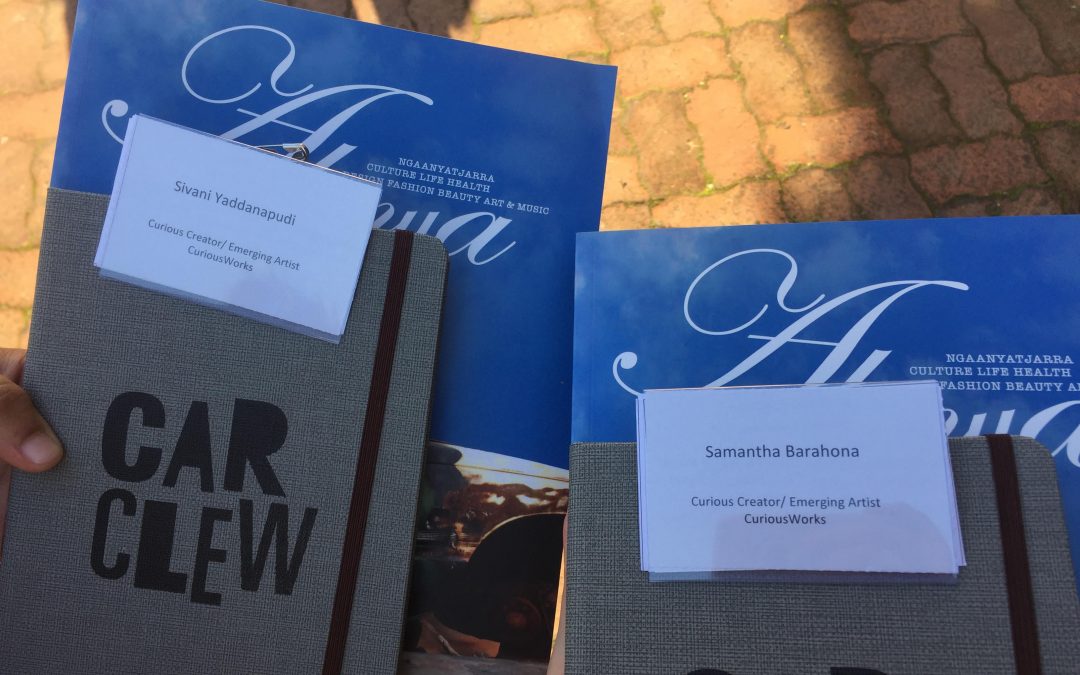 This year, Carclew hosted the National Youth Arts Summit in Adelaide from September 12- 13th. We sent Curious Creators Samantha Barahona and Sivani Yaddanapudi and asked them to report back on the experience. Samantha wrote down her thoughts based their shared experiences.

Attending the National Youth Arts Summit in Adelaide was an interesting experience. As we headed early morning to register for the first day of the summit, I was disappointed to see that many of the delegates were white – though I wasn’t surprised at all. With events like these, I always expect the crowd to be predominantly white. It is still unfortunate to see that this continues to be the case despite the push for more diversity in the arts for the past decade. Coming from a diverse background myself as well as growing up and working in such a culturally diverse area, I know that there are so many wonderfully talented artists, who don’t look like the same people we always see at these events, that deserve to be there too.

The day started with introductions and discussions about what to expect from the summit, with various breakout activities every so often to network and familiarise ourselves with each other. During these sessions, I was able to meet a group of great artists from writers to musicians and traditional Indigenous weaving artists to the youngest delegate who was only 13 years old. We gathered together again to discuss five topics that would shape the discussions for the rest of the summit. The key speaker asked around the room to share what our thoughts were on these topics; feeding the soul, diversity in the arts, value and identity, the green q and “the big why?”. A girl mentioned how the lack of diversity was evident in the room and that it was an issue that needed to be addressed. There were many nods of agreement around the room but interestingly enough, when we were asked to vote electronically on the topics that we found to be most important, diversity was the lowest from the five. A room full of white people who were the majority- it was to be expected but I couldn’t shake the feeling that this space was not for me no matter how hard I tried to convince myself that I belonged.

The second day was slightly better. The day was open to a wider audience- not just the young delegates from the day before. The issue of diversity was brought up again but this time it was addressed by actual people of colour. Gabriel ‘DyspOra’ Akon is an award winning hip hop musician from SA. He talked about his experiences in the industry and more specifically the discrimminatiion he has encountered as a Sudanese refugee making a name for himself in the Australian music scene. He stated that in order to see real change, the people on top making all the decisions should be replaced with people who come from diverse backgrounds who are equally, or even more so, qualified for the job. Manal Younus, an Australian freelance storyteller from Eritrea, also chimed into the conversation and added that in order for events like the NYAS to be more accessible to diverse groups, that organisations should do their research and make the extra effort to approach smaller communities and organisations that actually represent diversity properly.

Overall, I think that the NYAS was really eye-opening and gave me the time to self-reflect. Although I felt like I couldn’t connect to most of the people there, it was still refreshing to hear from other artists around Australia. One things for sure, the NYAS has made me appreciate the work that we do at CuriousWorks and everything the company stands for.

Carclew is a great organisation, doing amazing things for the arts in Adelaide. The consultants for the summit were kind and considerate; Carclew picked a great group of diverse, young artists to run the event. I believe that Carclew tried their best to be as inclusive as they could but perhaps for the future, more effort needs to be done to reach out to organisations and communities with a genuine understanding of diversity and inclusivity, and who implement those ideals always in the work that they do.

You can read more about Samantha and the projects she’s been involved in here.

You can read more about Sivani and the projects she’s been involved in here.